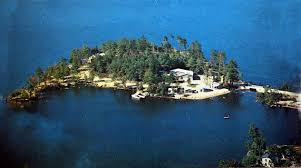 Christmas Island lies on Lake Winnipesaukee in Laconia, part of the Lakes Region of NH.

Christmas Island is bridged to Weirs Boulevard in Paugus Bay – a short walk to Weirs Beach.

Before it was renamed by a developer around 1950, Christmas Island was known as Plummer Island. The island is now a gated community of private homes; a gate at the bridge to the island limits access to property owners and their guests.

The name of the Christmas Island Resort, built in 1954, was somewhat misleading, as the resort was located not on the island, but on the mainland, opposite the island. In the spring of 2013, the resort closed permanently, after it was sold to a developer with plans to demolish the 45-room property and build 18 luxury townhouses. Before the wrecking balls and bulldozers could roll, on September 28, 2013, the vacant resort burned to the ground.

Copyright 2022 New England Real Estate Network, Inc. All rights reserved. This information is deemed reliable, but not guaranteed. The data relating to real estate displayed on this site comes in part from the IDX Program of NEREN. The information being provided is for consumers' personal, non-commercial use and may not be used for any purpose other than to identify prospective properties consumers may be interested in purchasing. Data last